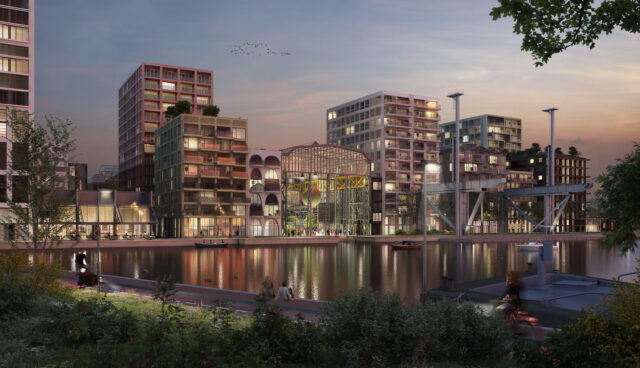 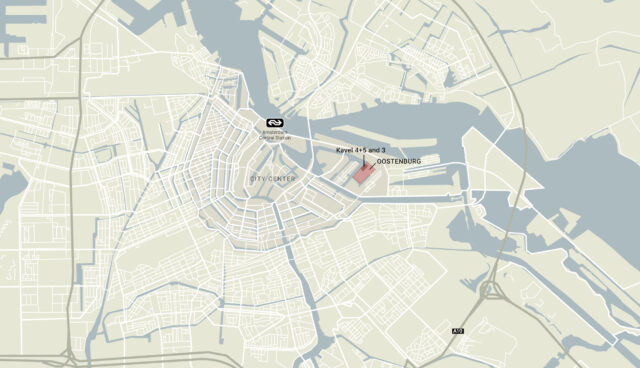 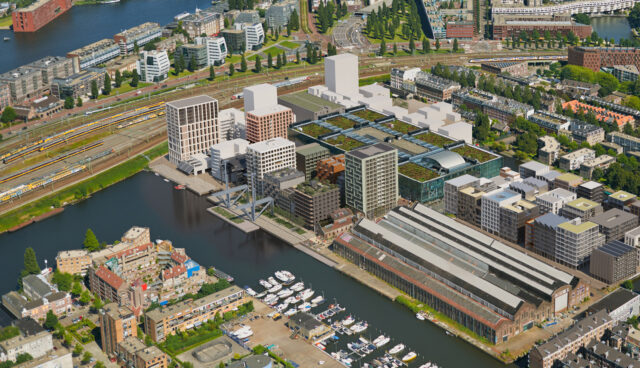 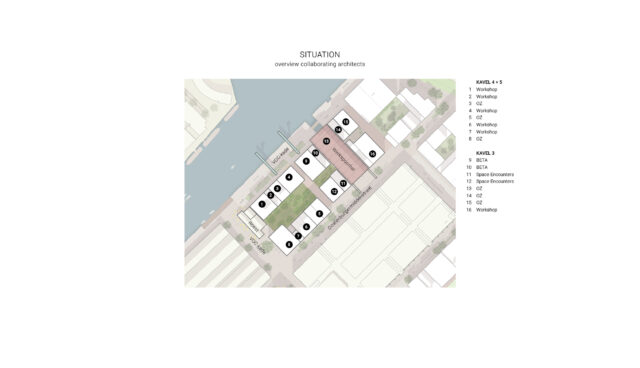 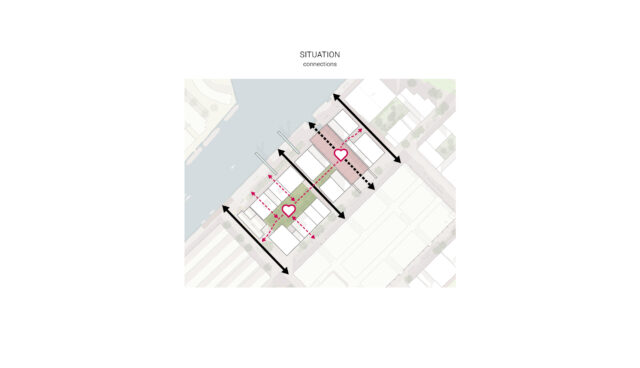 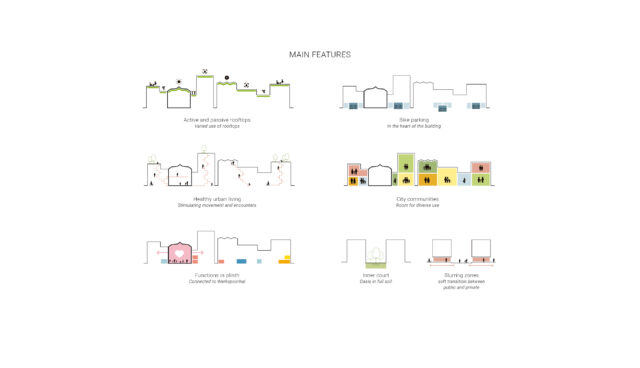 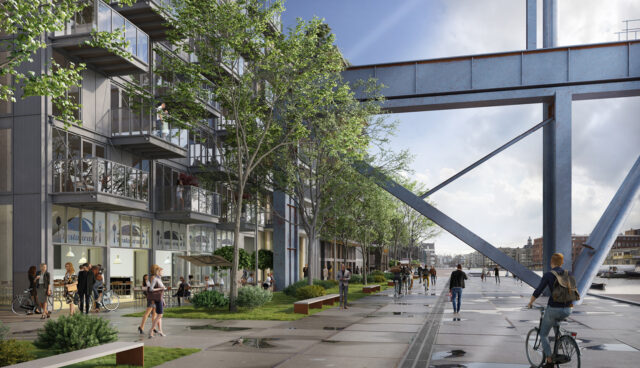 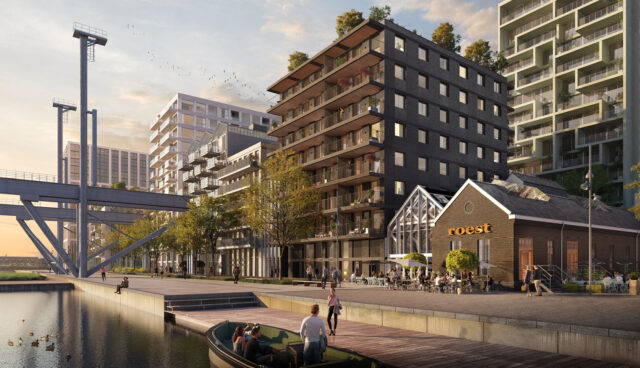 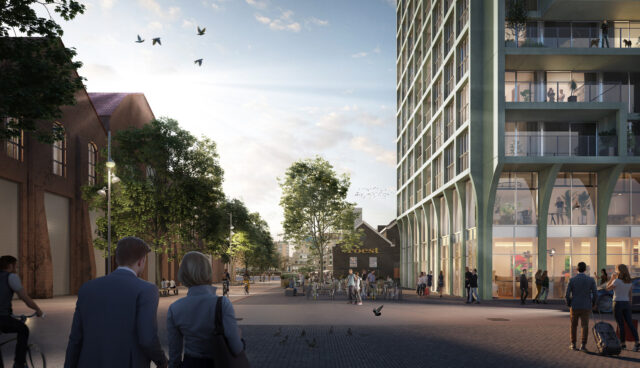 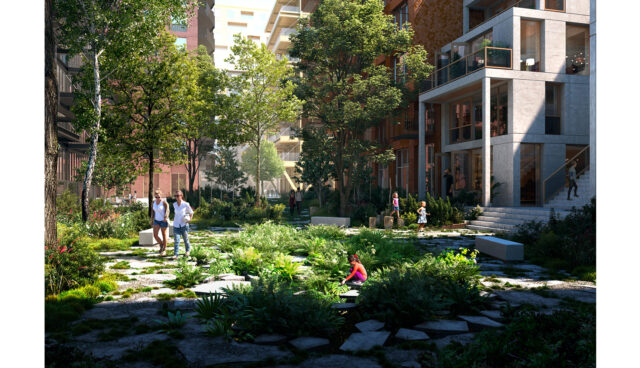 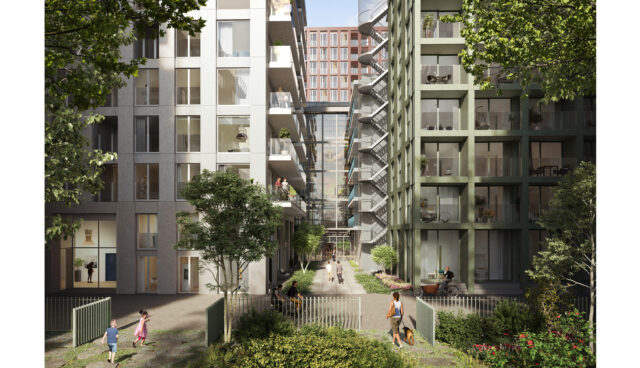 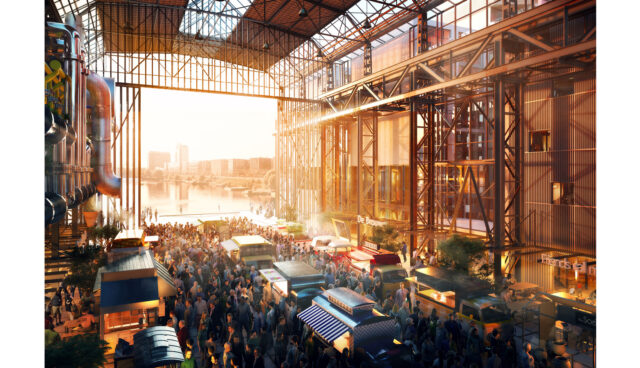 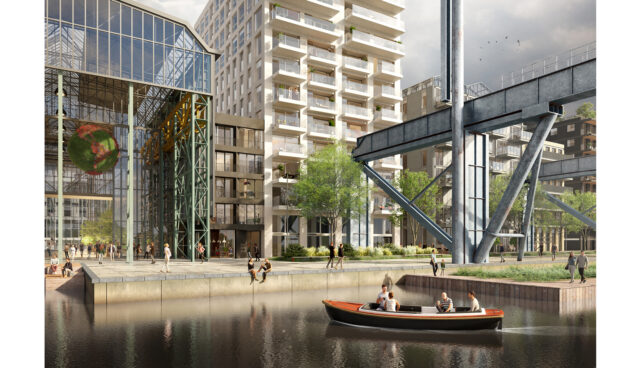 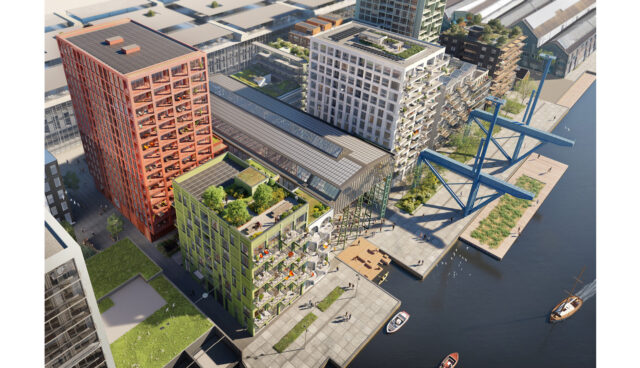 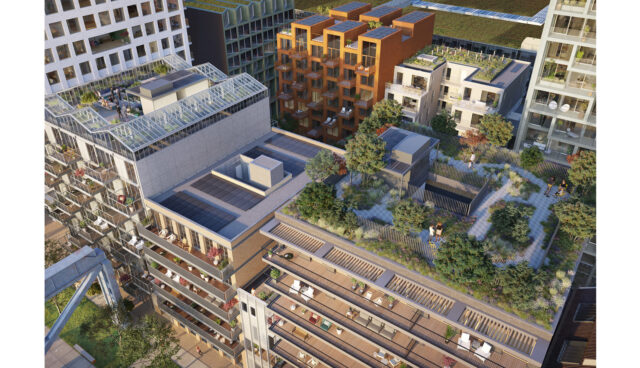 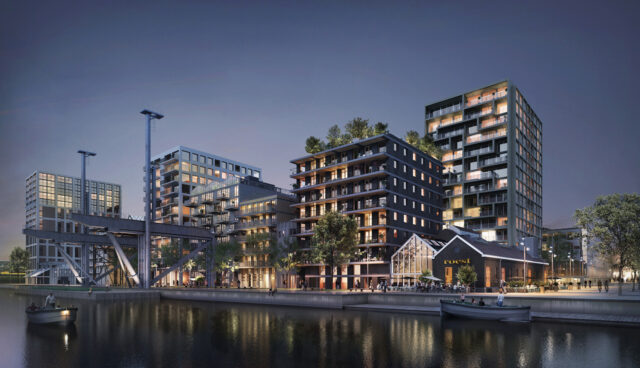 Sturdy, Lively, Contrasting, and Island
Oostenburg, an island in the lee of Amsterdam’s city centre, will be transformed over the next few years into a lively Amsterdam residential and working district. A total of 1500 apartments are being developed here. As core values for the transformation, the masterplan by urban design agency Urhahn has chosen for Sturdy, Lively, Contrasting and Island. The historic core of Oostenburg, consisting of a former VOC shipyard and 20th century industrial halls, will remain. The identity of the island will be strongly felt again, but also strengthened in relation to the other adjacent inner-city Amsterdam islands.

OZ: plots 4 + 5 and 3
Architectural office OZ is responsible for the basis of the urban plan for plots 4 + 5 and 3, which builds on the opportunities in Urhahn’s urban plan. Head architect and partner Chris Zwiers and partner John Bosch explain the strength of the design, which was elaborated with Workshop, BETA, Space Encounters and landscape architects Flux and Lola. “Oostenburg is spontaneous; it creates liveliness in the streets and that makes the neighbourhood successful. OZ is often in this type of area development. The question of who ‘owns’ or uses the public space recurs in every development. Public space is becoming more and more important.

Urhahn Masterplan
The framework for the new Oostenburg can be found in the Masterplan for Public Space by urban design agency Urhahn. They developed the master plan next to the urban plan for an organic development of the area. A conscious choice was made for development by a multitude of parties. This creates a rich diversity of buildings and functions. The public space provides a counterbalance to the contrasting buildings. The wharf floor, which lies beneath the entire plan, shows coherence to reinforce the identity of the area. The Masterplan was followed by the Beeldkwaliteitsplan Oostenburg (by Urhahn and Studioninedots), which outlines the principles for the building styles.

New urban environment
Like many islands, Oostenburg as an isolated area has had the chance to develop its own identity. From 1660 to 1800, the VOC shipyards were located here. After that, Oostenburg remained an industrial place. At the beginning of the 20th century the five Van Gendthallen were built, for the Werkspoor-Stork engineering works. This history makes the location unique.

Cooperation on plots 4 + 5 and 3
“Project developer VORM initially asked OZ to tender jointly for plots 4 + 5. In the first phase of the tender, OZ drew up the urban plan, using Urhahn’s Master Plan as a starting point,” explains Zwiers about the acquisition of the assignment. The urban design was the starting point, as was the principle that each block should be at least two storeys higher or lower than its neighbour.

After a presentation to the assessment committee, OZ was one of five parties allowed to proceed to the second tender phase. Zwiers: “We then asked the young agencies Workshop, BETA and FLUX to join us. With their strong philosophy, they were able to reinforce our urban development concept. Workshop’s strength is their city- and people-oriented approach. BETA guarded the presence of Healthy Urban Living in the second phase. In the tender for lot 3, which includes the former industrial Werkspoorhal, the same combination was applied, with Space Encounters and LOLA added.

Soft city
How do you develop a successful new urban district? The challenges of bringing a new district to life are a point of concern and attention for every client and urban planner. OZ and the other offices apply the soft city concept to the plots. A successful city has spontaneity as an important characteristic,” says Zwiers. As an inhabitant, you happen to bump into a restaurant or local resident. It increases spontaneity and interaction in behaviour.