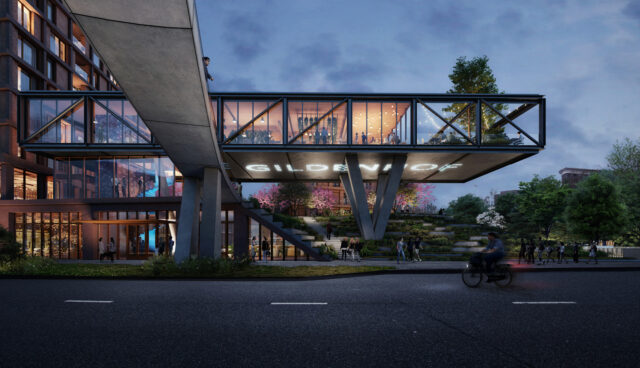 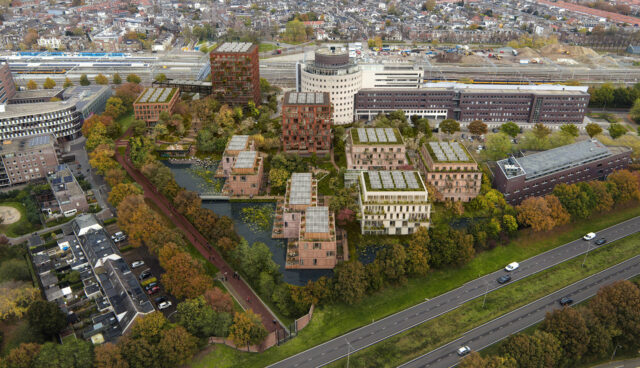 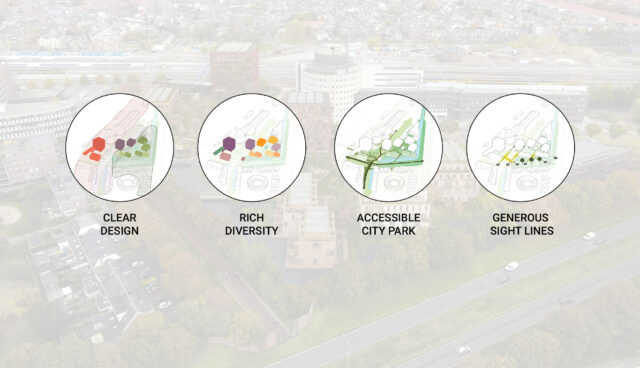 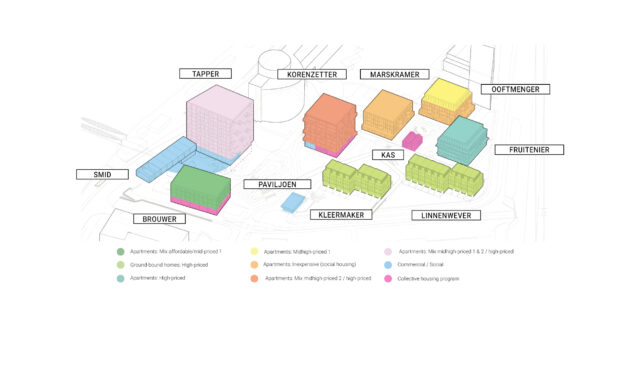 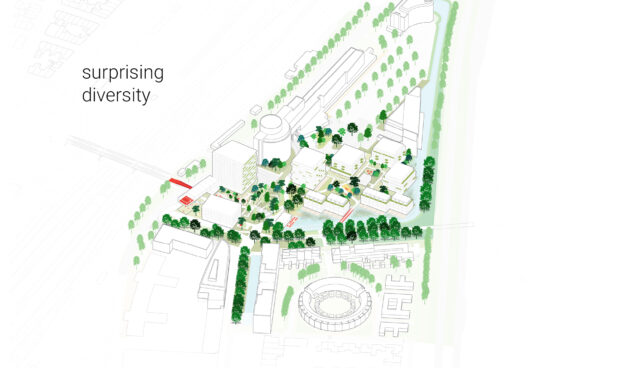 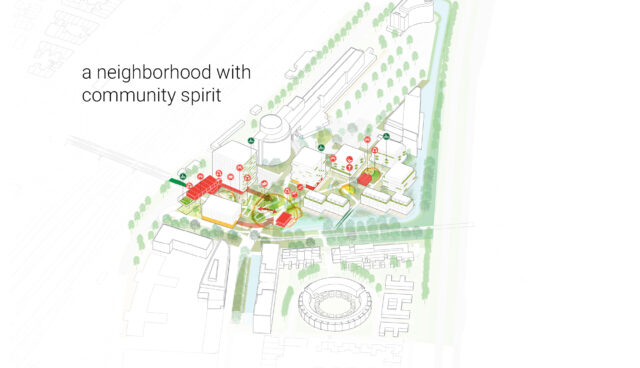 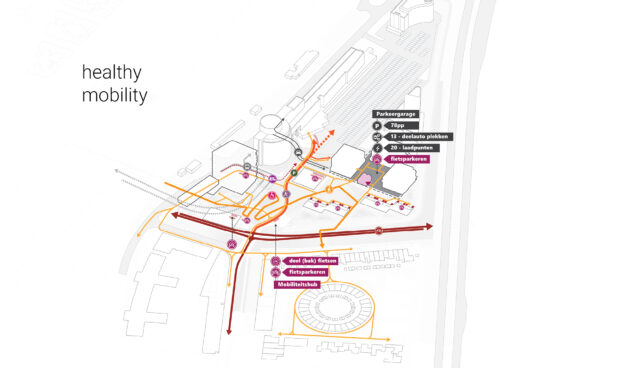 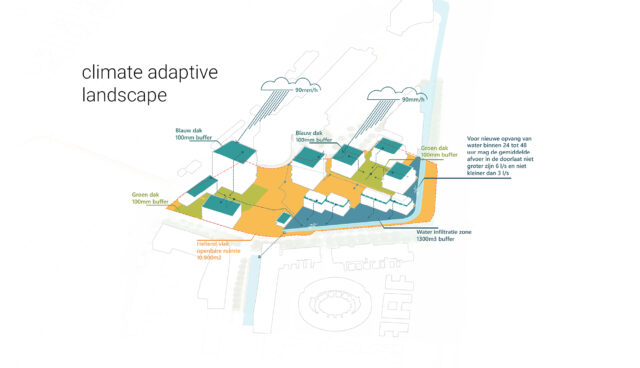 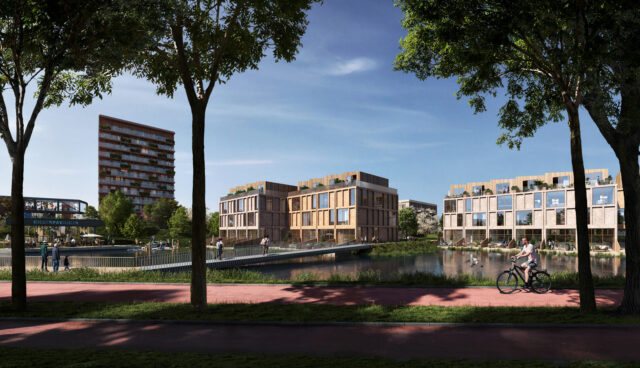 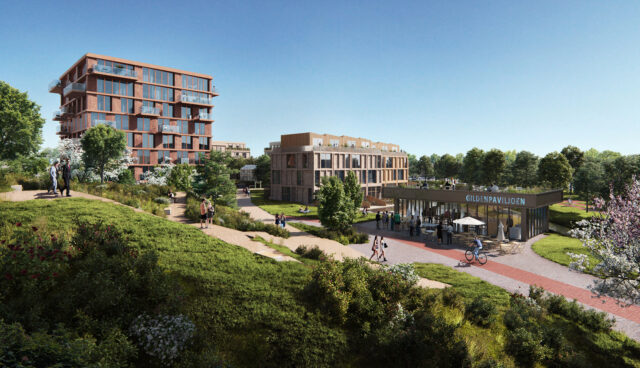 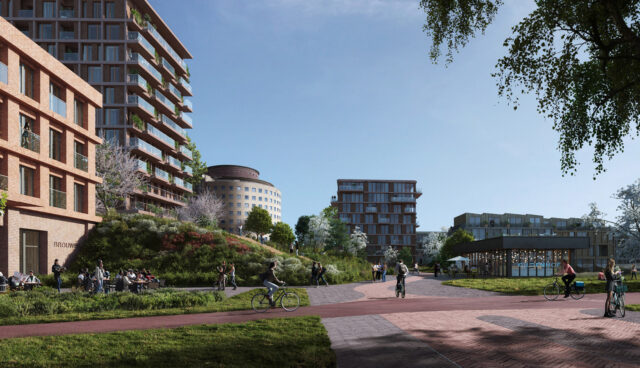 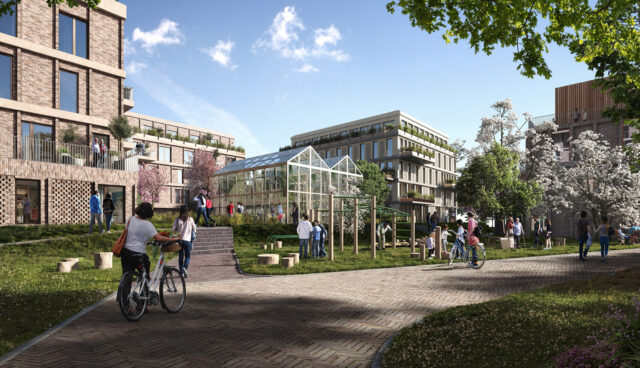 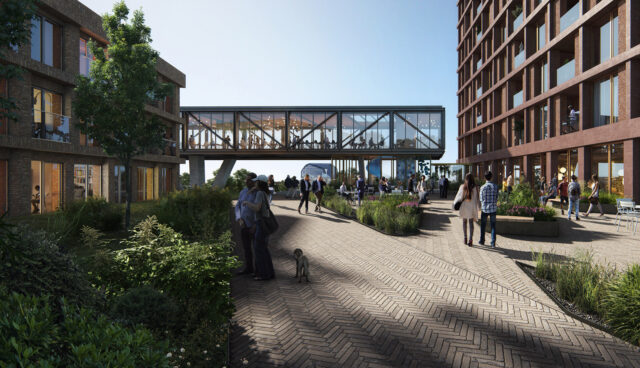 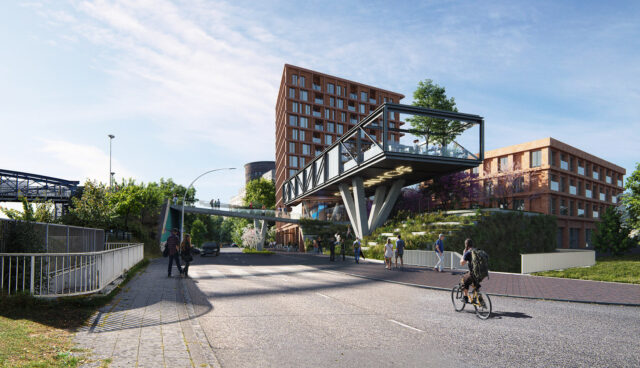 Het Gildenhof is the crowning end of the Koggepark in Zwolle. This name refers to the history of the “Hanze stad” and the park setting. We designed detached buildings in a city park, composed to provide clear sightlines for residents, neighbours and passers-by. We have opted for a building setup that block out noise of the adjacent rail track and that embraces the greenery with sun facing balconies. In an open setting we envision a family of buildings, with subtle architectural differences, as a car free residential area within a city park.

The historic railway bridge is characteristic for this site. An iconic bridging gatehouse, constructed in a sturdy steel, it is the pivot point between the park and the former industrial rail environment. The scale and size of the buildings are geared to the rail environment: in the north larger buildings along the rail track, to the south a smaller grain facing historic buildings. Three recognizable areas are created in between: a higher courtyard as a gateway to the historic railway bridge connecting to the city centre of Zwolle; underneath along a green hill an open city park as crowning of the Koggepark connecting the offices and a lower-lying open residential court with a unique footbridge to Stockholmstraat for a stroll through the neighbourhood.

The goal was to fit in Het Gildenhof in its surroundings. As brick is typical of the station area with a colour spectrum in reddish brown earth tones, this craft of brick fits in well with the idea of Het Gildenhof in a matching colour scheme. The contemporary station area refers to a classic architecture which is shown in storey height, window rhythm, eaves and nuances of colour and material. We connect to this classic reference with a “plinth-body-top” three partition in façade design. The station area’s architecture shows predominantly a horizontal layout in bands and layers. We made this horizontal layout the bearer of the architectural expression in Het Gildenhof.

A successful residential area allows for a human scale and individual expression. Beholding a contemporary architecture, we introduced a specialization of the entrance door by various techniques: well noticeable recesses and expressive door design. Encounters arise at the interface of public and private. In Stockholmstraat there are subtle transitions between the front door and the street in the form of a ‘pavement’. This technique we call an encroachment zone. This approach fits the idea of ‘living in a park’ as we have translated it into Het Gildenhof in various ways, realizing a nature inclusive neighbourhood where people can become happy.