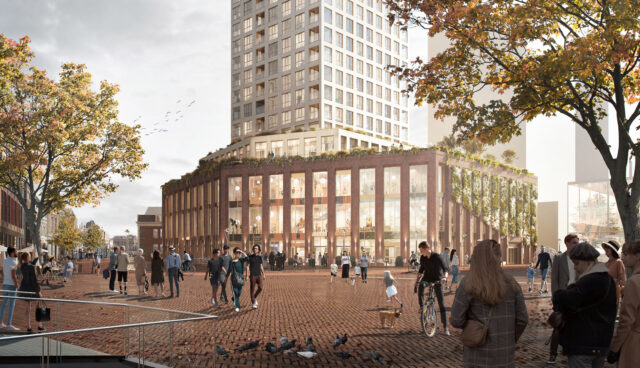 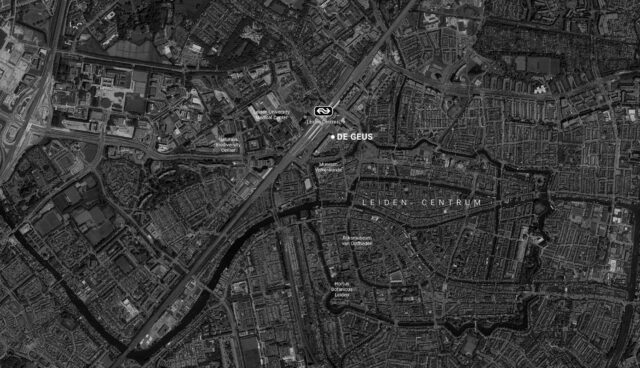 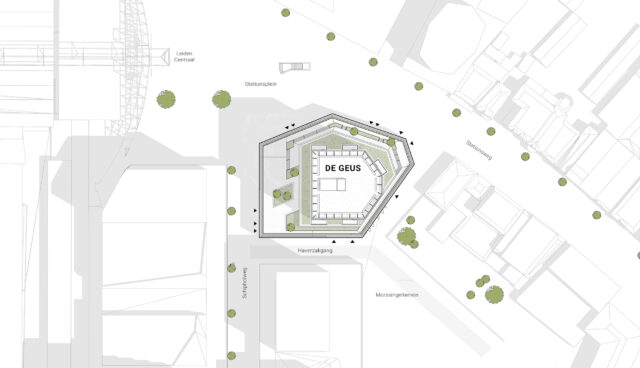 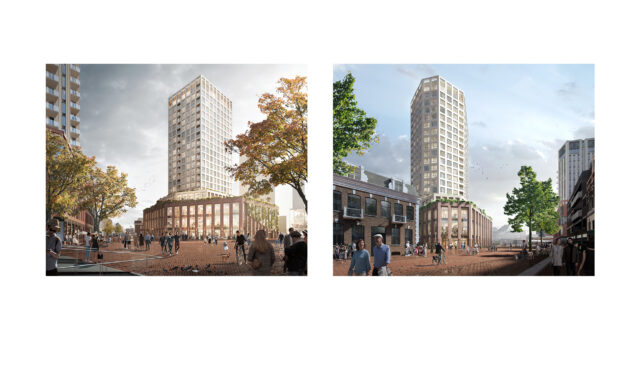 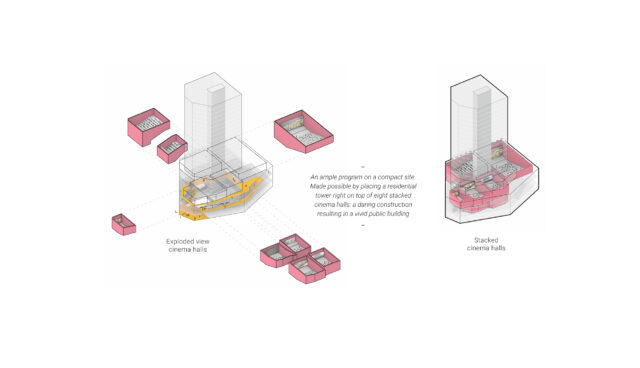 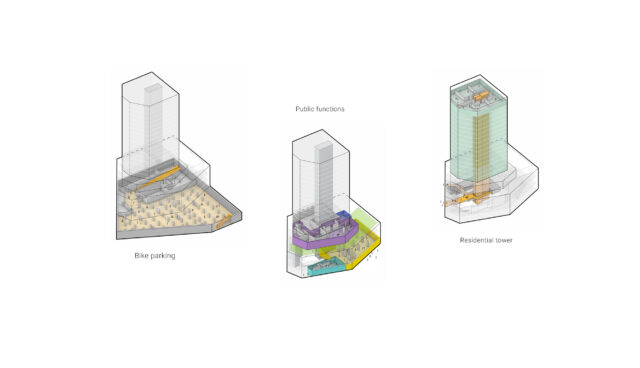 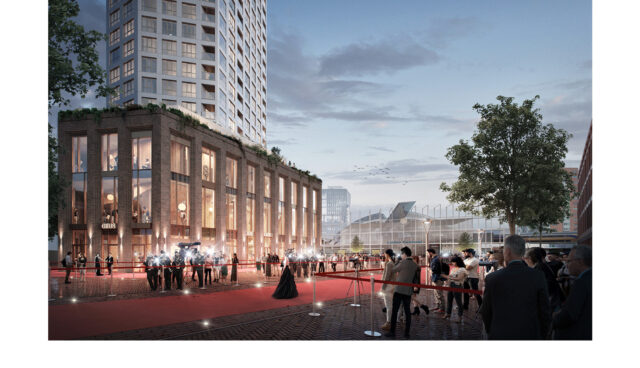 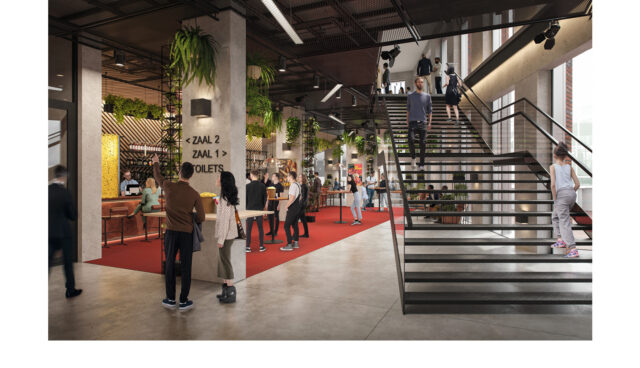 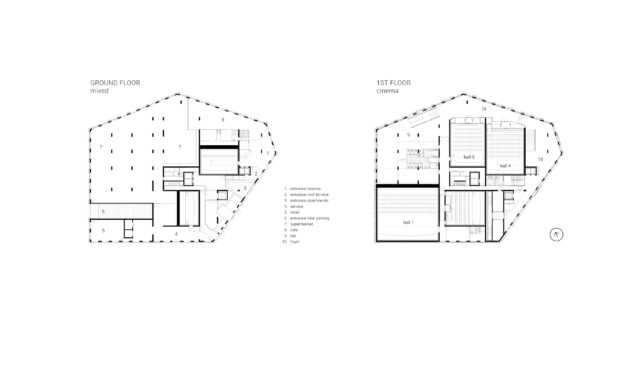 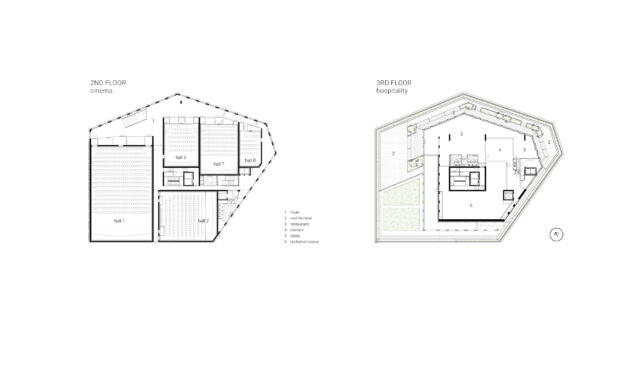 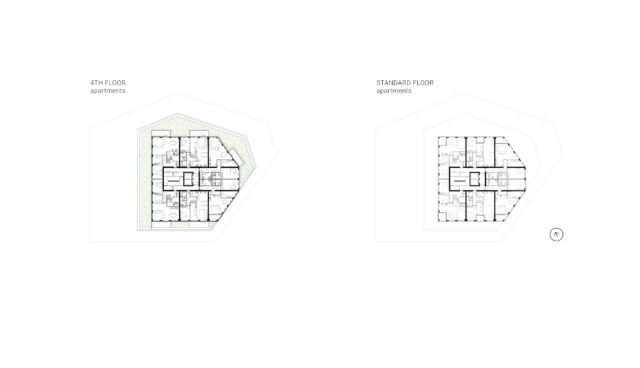 De Geus is a new icon at Leiden Central Station. This daring concept boosts the liveliness in the station area with an urban mix of program in a single building: cinema, convention center, restaurants, convenience store, retail, public bike parking, apartments, and a roof garden. This ample program on a compact site was made possible by placing a residential tower right on top of eight stacked cinema halls: a daring construction resulting in a vivid public building.

The brick plinth with refined detailed piers and high windows opens the interior mix of program to the station square. A multiplex cinema, conference center and restaurants guarantee day and night a lively interaction. The convenience store and the public bike parking face the station. The cinema and restaurants entrances face the historic city center. In this way the building changes the station square from a traffic crossing into a lively city center area. De Geus creates the invitation to enter Leiden.

De Geus connects
The station area forms a transition zone between the modern high-scale academic hospital campus and the small-scale historical city center. The area is currently under transformation from a chaotic traffic area into an attractive place to stay. This requires the credible liveliness offered by De Geus with its public program and inviting roof garden. A city block that unites the two worlds by means of a brick plinth in the scale of the inner city and a light tower that marks the entrance to the station area.

Affordable housing is underdeveloped although it is in high demand. De Geus contributes to the municipal housing goals accommodating starters and empty nesters who are now too often forced to move to other cities. The residential tower with a recessed position on the plinth avoids a sharp contrast with the historic center and allows for a pleasant wind condition. The apartments with ample views in combination with the rooftop garden generate a pleasant living experience in Leiden.

Read more about the building here.