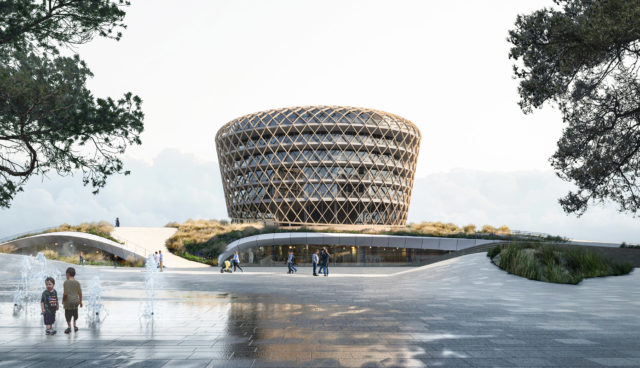 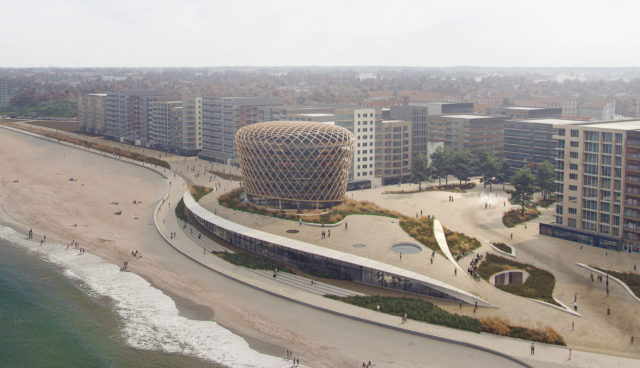 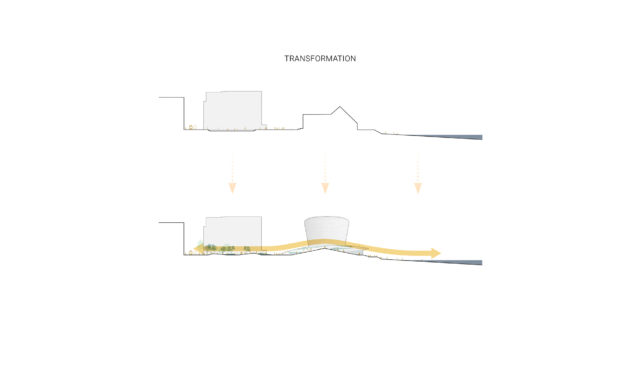 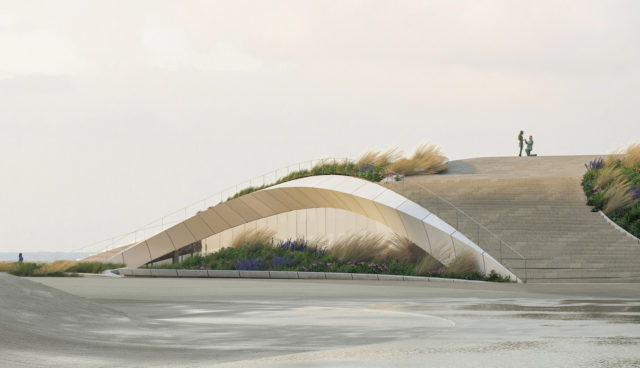 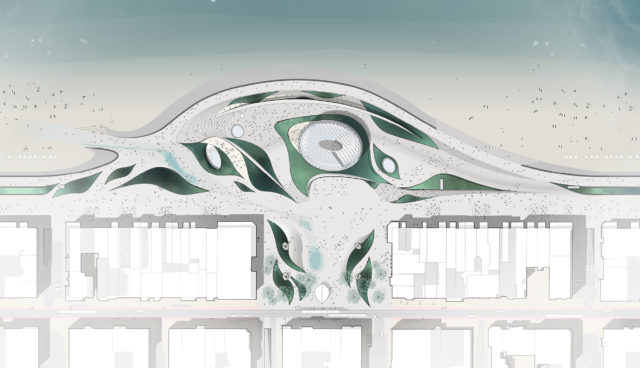 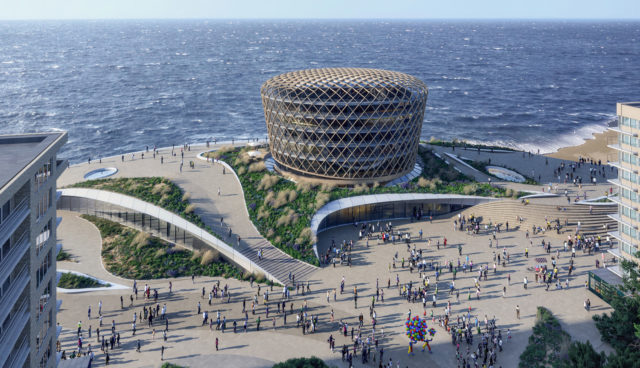 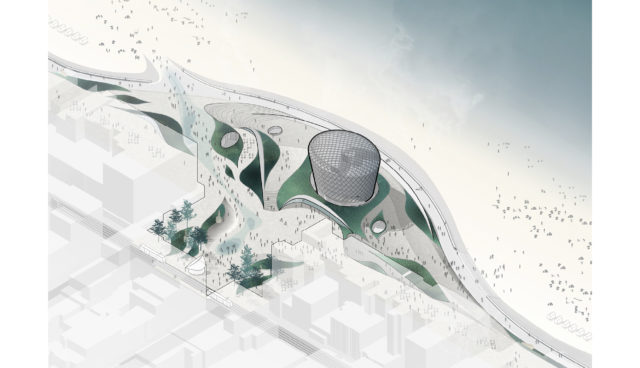 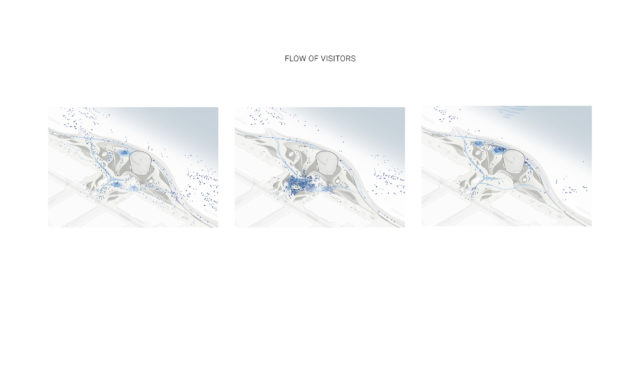 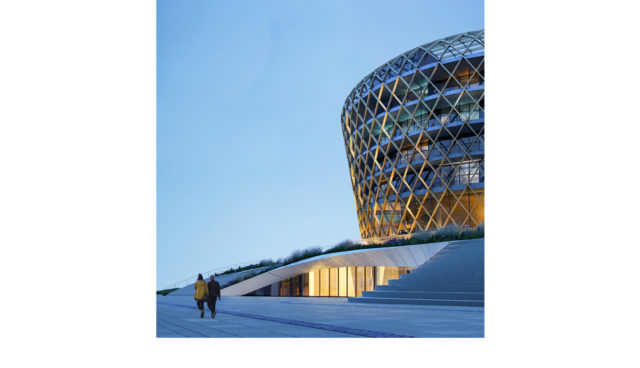 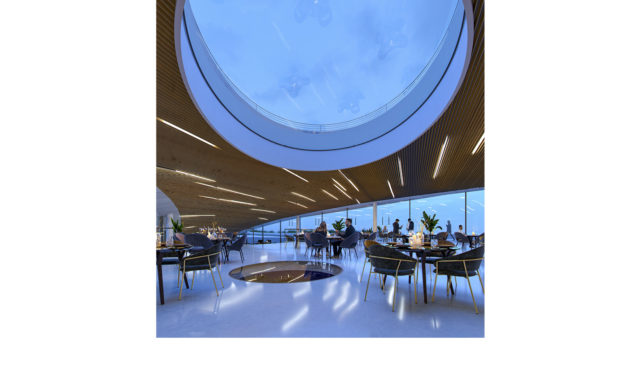 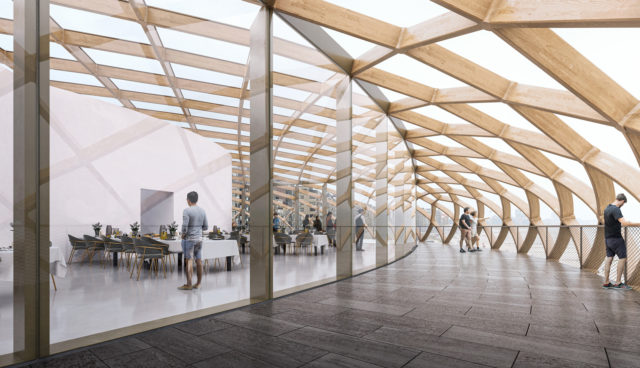 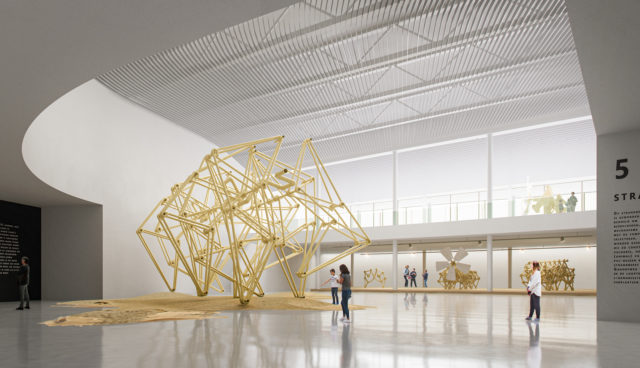 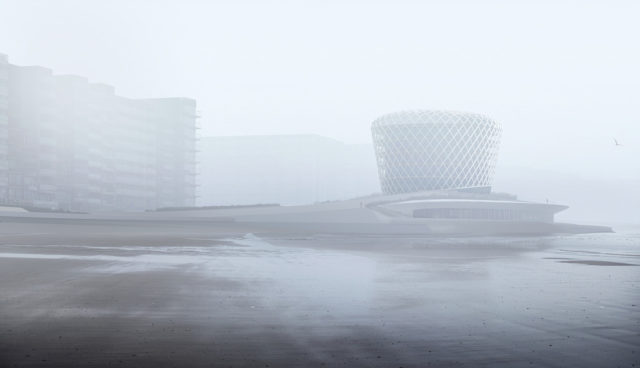 Middelkerke presents a new casino building that creates a unique dune landscape. The Nautilus consortium wins the competition to create a new architectural anchor along the Belgian coast, with a design that seamlessly connects the building with its surrounding landscape.

The municipality of Middelkerke in Belgium will soon be enriched with an iconic casino. The new casino will not be housed in a dedicated building, but will be integrated in the landscape in a way that rewrites the historic relationship of the coastal town with the sea. This is revealed in the ambitious preliminary design of the Nautilus consortium, who were selected by the council as winners of the Design & Build competition for the casino located at the well-known Epernay square.
“With this project our coast will be enriched with a new architectural anchor, that accurately represents the character of Middelkerke”, according to the mayor Jean-Marie Dedecker. “It transmits strength and soberness as well as sophistication, with a lot of love for the sea and the dunes. In addition, this project may mean the beginning of the renewal of Middelkerke’s town centre as an appealing place to live and visit.”

Together with a team of urban planning experts, the municipality of Middelkerke studied the four selected proposals for the casino building in detail over the past few months. After a thorough evaluation, the council selected the Nautilus consortium as the winner, a collaboration between developer Ciril, chief designers ZJA (architecture) and DELVA (landscape architecture), OZ (casino and hotel design), executive architect Bureau Bouwtechniek and contractors Furnibo and Democo. They are assisted by experts from COBE, VK Engineering, Beersnielsen, Witteveen+Bos, Plantec, MINT and Sertius.

The construction of the new casino building was conceived by the designers as an opportunity to also work on flood risk management (dike reinforcement), public space quality, making the seawall car-free and connecting the Epernay square to the sea. The uniqueness of this design is that the building typology of a casino – often a closed box – is turned inside out and integrated into a multifaceted project situated in a public dune landscape. It transforms the seawall into a unique destination for encounter, play, culture and entertainment along the Belgian Coast.

Inspiration for the design was found in the story of the town’s origin. Middelkerke originated on the island of Testerep and was able to grow into an abundant fishing village through the natural protection of a dune and a direct connection to the North Sea via a natural canal. The dunes and water channels of Middelkerke disappeared as a result of urbanization over the last century. The construction of the casino building in Middelkerke will function as a tool to renew this historic coastal landscape and give it a contemporary meaning.

The building program nestles itself naturally in the landscape. For example, a brand-new event hall, restaurant and casino will be situated behind completely transparent facades under the dune, offering spectacular views of the beach and the sea. The volume of the hotel has a strong visual presence and yet a modest footprint, and stands like a boulder amidst this elevated landscape. It is an eye-catcher, but one that displays a strength, soberness and refinement characteristic of the Flemish coastal landscape. Its form is simple yet enigmatic, and refers to the shapes and colours of nature and of the fishing port. The hardwood voile around the hotel, just like the wood of the quays, lock gates and dolphins, will change colour under the influence of weather and time. From a distance, the hotel is an inviting visual beacon, a sculpture with soft contours.

An economic impetus for Middelkerke

The new casino building will provide an impetus for the economic renewal of the Epernay square. The entirely car-free public space – which doubles in surface area compared to the existing square and seawall – places cyclists and pedestrians first while remaining easily accessible for cars, thanks to the construction of an underground parking garage. To make the public space more inviting, hundreds of meters of seating have been integrated into the design, framing green zones filled with beach grass and sea lyme grass. The highest point of the dune landscape offers an extraordinary panorama of the North Sea and the sunset.

In the building, the multifunctional event hall offers space for concerts, exhibitions and events. The restaurant has terraces overlooking the sea and the casino’s mezzanine also enjoys a wide view of the North Sea before players head towards the games room. The impressive foyer at the heart of the building connects all these spaces and transitions into the beach hotel, which from a great distance forms a striking beacon along the Belgian coastline.

Not only during the day, but also after dark the ‘boulder’ remains an eyecatcher. The sophisticated lighting design, illuminating and emphasizing the wooden structure of the hotel, reinforces its special appearance. With this project, Middelkerke casts off the concrete corset and chooses a graceful, sustainable and recognizable silhouette for the Belgian coastline.

Sustainability is of primary concern in the proposed design. The design team takes finite energy resources into careful consideration by avoiding waste in the first place, but also by using recycled materials as well as applying more efficient production processes. Environmental criteria have been considered as important as functionality, aesthetics, ergonomics, safety and economic value. A good example of energy efficiency in the project is the cantilevered dune on top of the ground floor and the terrasses of the hotel tower, which protrudes over the façade and creates shade during hot summer months, which in combination with night-time cooling will significantly reduce the need for active cooling.