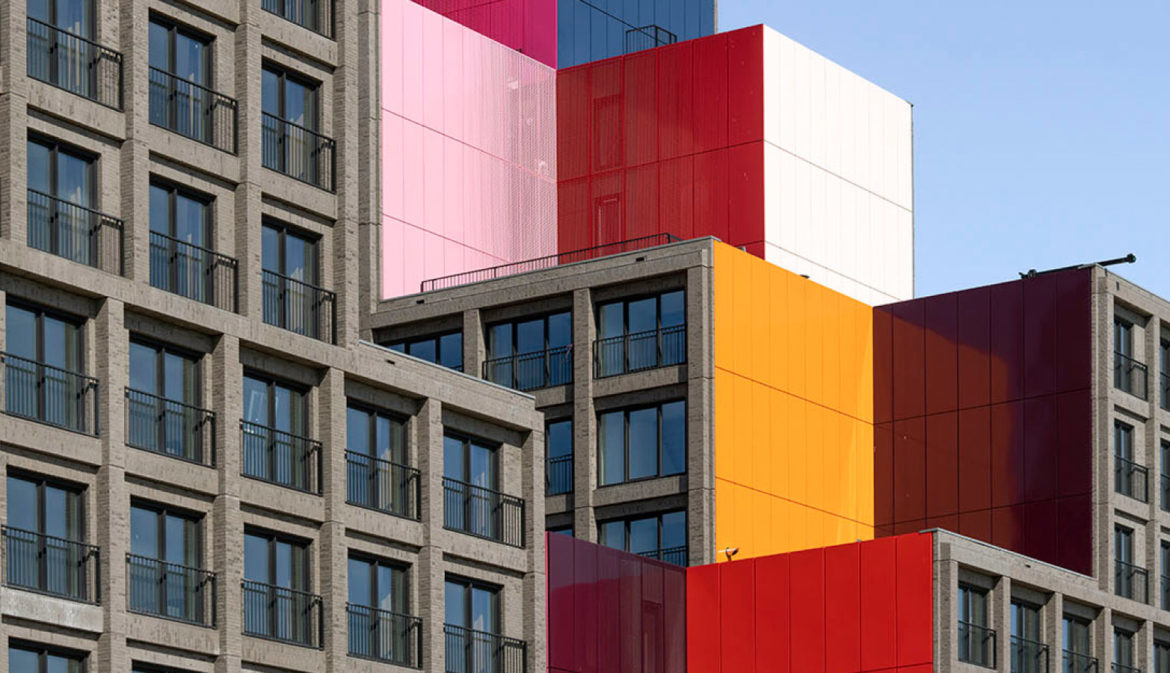 Business Park Amstel III struggled with an increasing lack of occupancy of the offices and a decreasing liveability. An area-targeted approach came into being as there was a widely felt sense of urgency, as Chris Zwiers says: ‘Everyone was worried about it.’ At about that time a meeting took place with American investor Greystar. ‘Greystar crossed over to Europe and the Netherlands in 2015 led by the ambition to expand their portfolio here. The company was already involved in the campus concept in Diemen and was searching for other big potential locations; close to public transport and with a crowd-puller nearby. The surrounding area of the AMC near metro and train station Holendrecht seemed to qualify.’ Eelko Korteweg, Investment Director at Greystar, regarding this moment in time: ‘We were informed of this unique development opportunity via Fakton and Blauwhoed, after which Greystar and Blauwhoed established a close relationship with the municipality and further defined a mutually compiled plan. This plan related to the criteria for the urban design and further project development.’

The preconditions appeared favourable. As the Municipality of Amsterdam was open to innovation, Greystar happily took on the pioneering role. The OurDomain concept came into being, with the addition of approximately 1,600 apartments (with three new blocks and the redevelopment of two existing buildings). Korteweg explains: ‘This is a typical example of a quick start urban regentrification”; acquiring a 30,000 m² office building which had been empty for years in combination with an adjoining lot and to then turn it into a next generation OurDomain living concept which encompasses an enormous urban housing project. After Greystar, in collaboration with Blauwhoed, had obtained the permits to develop the apartments, in combination with a wide range of made-to-measure facilities and a large, communal public outside area, the municipality encouraged many other owners, developers and other parties to also develop residential and mixed projects within the Amstel III area.’ After the recent opening of OurDomain Amsterdam Diemen, this will become the second operational OurDomain project, according to Korteweg. ‘Following Amsterdam, we started an OurDomain project in Rotterdam and the Utrecht Merwede Canal Area soon after that. In collaboration with Stebru and BOAG, we are currently working on a 612 apartments project in Rotterdam, in the city centre, close to the Markthal.’

The urban area in the South East district is due for a big change as well. Chris Zwiers: ‘We have committed ourselves to a complete inversion of public space. Nobody walked or cycled here and it made you feel lonely. There have been other initiatives developed in the area but the connections in between as well as those to the surrounding area were inadequate. We chose to lead all routes via the new public area between the new buildings. This will give OurDomain an important connecting function.’

Korteweg also emphasises the importance of a wider context: ‘By adding approximately 1,600 apartments for students, starters and families, Greystar contributes a substantial part of the dwellings required and highly sought after in Amsterdam. Following our initiative, many new living and mixed-use projects are currently in progress in the Amstel III area. The South East district can truly be regarded as an extension, bringing a totally new buzz, to the city of Amsterdam. We are convinced that our OurDomain project is really of added value to the entire area. In this respect, the dwellings are aimed at those working at the AMC or at other places in the South East district. Furthermore, we are stimulating the diversity of the area by offering residents and neighbours additional services. Services with a wider accessibility, such as lounge areas, study/work areas, outdoor areas, laundrette, supermarket, sports facilities, fitness, restaurant(s), coffee bar and other complementing functions that befit the living needs of the OurDomain residents and those in its immediate vicinity.’

The OZ architect praises Greystar’s determination and guts: ‘Meanwhile, other investors have spotted opportunities as well, but Greystar was the first with sufficient nerve to pursue such a solution in this area. This plan really emphasised their product development abilities; new living for young city-dwellers.’ Looking back, Zwiers refers to this project as a typical example of the methodology of OZ as an architect agency: ‘You could see our role in this process as key to smooth the organization. The power of the drawing gives direction; all at once there is movement. And once a close-knit team is established the sky’s the limit.’ According to Eelko Korteweg the strength of the team was the most important lesson learned: ‘OurDomain Amsterdam South East is a joint effort of the municipality, Fakton, Blauwhoed, OZ, VolkerWessels, Greystar and our other partners. And it was this collaboration and particularly the commitment of all parties involved that made it possible to realise such a huge task, on such a large scale.’