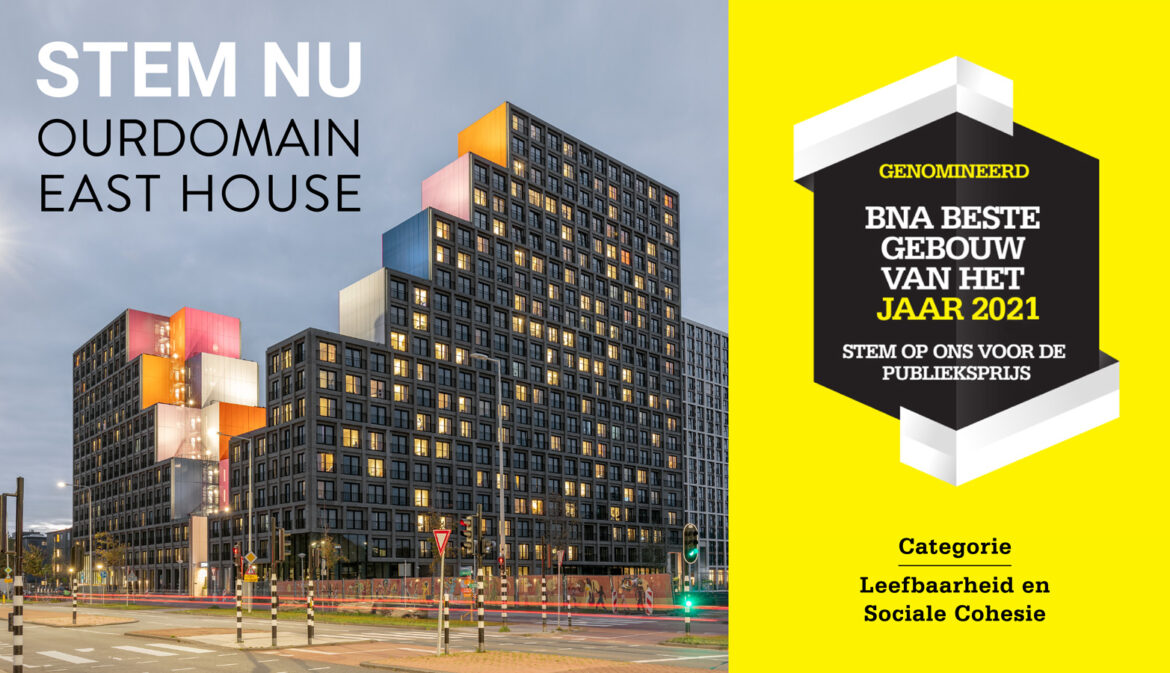 We are extremely happy with the nomination of East House for the BNA Best Building of the Year Award !!!

Take part and vote for this building now here.

East House is nominated in the category ‘Quality of Life & Social Cohesion’. It is the first residential building in Amstel III, the largest transformation area in the Netherlands. The coliving concept with adjacent park facilitates interaction between residents and with the neighborhood. As a catalyst in the area development, OurDomain connects routes and functions, strengthens social cohesion in Amstel III and stimulates business.

The 1000 studios are intended as an affordable housing option for students and young professionals. East House features communal facilities such as lounges, gardens and terraces, flexible work and study spaces, meeting rooms, game room, music room, cinema, kitchen clubroom. OurDomain’s service team organizes weekly events that focus on interaction between residents. Social cohesion is enhanced by the organization of the buildings (of which East House is one) around an open, publicly accessible and green park. This campus landscape connects the three residential buildings and, through its public function, also establishes a connection with the neighborhood. The residents and the neighborhood will find space here for sports, relaxation, recreation and activities. The plinth includes a city supermarket, restaurants and a gym, accessible to both residents and the neighborhood. Through OurDomain there are connections to Holendrecht Center, the AMC, the station and the surrounding buildings. The new connections contribute to the transformation of a closed, monofunctional area into an open, multifunctional living environment. Walking and cycling are no longer a special thing in this neighborhood originally designed for the car.